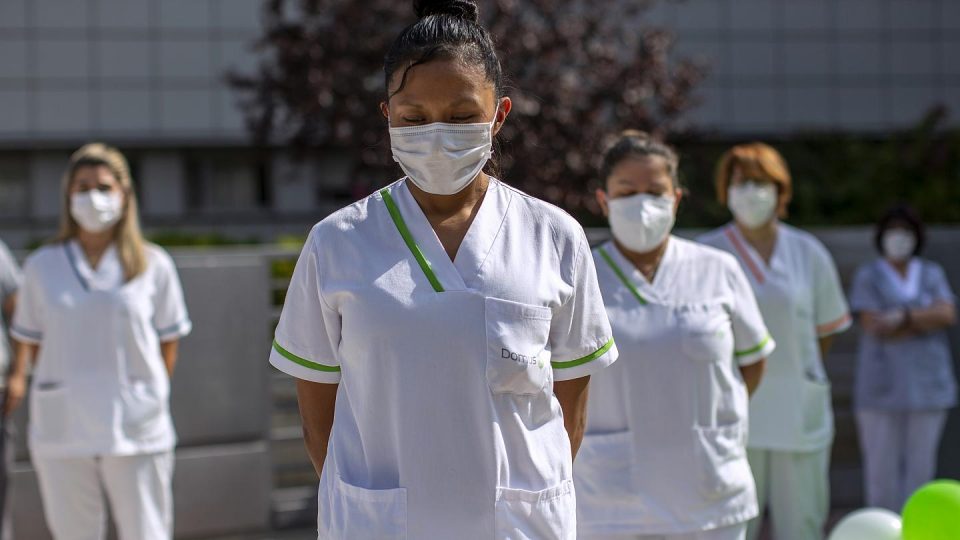 Many residents in the Netherlands will, for the first time, be advised to wear a face mask in shops as the country introduces a range of measures to control a second coronavirus wave.

Compared to its neighbours, the Netherlands had largely avoided strict restrictions until now.

This week nearly 3,000 infections daily are being recorded in the nation of 17 million people.
The new measures will start on Tuesday and last for at least three weeks.

“We are doing our best, but the virus is doing better,” Health Minister Hugo de Jong admitted on Monday.

In a televised press conference, Dutch Prime Minister Mark Rutte explained that the situation in the country’s three largest cities – Amsterdam, Rotterdam and The Hague – had become “serious” and required urgent action.

From Tuesday people should avoid non-essential travel between the three cities, he said.

Restaurants and bars will be required to close by 22:00 – a move that echoes other European countries including the UK, Spain and France which have introduced similar earlier closing times.

People will be advised to work from home; social gatherings inside people’s homes must not exceed three people, and fans will no longer be allowed to attend sports events.

Mask-wearing was already compulsory on public transport, but the Dutch government had so far avoided suggesting customers wear one inside shops.

The new measures advise that shoppers in the three largest cities should cover their face from Tuesday. Shops will be allowed to deny entry to those who do not wear a mask.

media captionSome people, including scientists, believe the hard anti-pandemic measures can be confusing
“Naturally these measures will have negative economic consequences,” the prime minister said. “But allowing the virus to flare up would have even bigger consequences, including damage to the economy.”
On Monday the National Institute for Health reported 2,914 new cases, after the country broke its record for new infections on Sunday with 2,995 cases.

Is it time we learned to live with the virus?
WHO warns Europe over ‘very serious’ Covid surge
New global virus test will give results ‘in minutes’

Earlier in the year the Dutch government adopted a strategy of “intelligent lockdown” that avoided strict national restrictions and did not shut down as much of public life as in many other countries.

At the time Mr Rutte described the Netherlands as a “grown-up country” where people were glad to be “treated as adults”.

What’s happening in the rest of Europe?

Tight restrictions have been expanded in the Spanish capital, Madrid, and its surrounding areas, affecting one million residents. From Monday, people are not allowed to leave their area unless to go to school or work, public parks will close and opening hours are restricted.

In France, bars in Paris and 11 others areas have to remain closed between 22:00-06:00 and there is a ban on festive or recreational events including wedding receptions, students parties and organised gatherings in hired locations. New measures have also been introduced in the cities of Bordeaux, Grenoble, Lille, Lyon, Montpellier, Nice, Rennes, Rouen, Saint-Étienne and Toulouse. Last week, France recorded its highest number of cases since lockdown restrictions were eased.

Cafes and bars in the Belgian capital Brussels will have to close by 23:00 while other businesses selling food and drink will have to shut at 22:00. The city eased a number of its coronavirus measures last week, including compulsory mask wearing. The country has recorded more than 167 cases per 100,000 people over the past two weeks, compared to 99.7 in the UK.

In Germany, a spokesman for Chancellor Angela Merkel said the growing number of new cases was “highly worrying”. German tabloid Bild reported that Merkel told her party’s senior members that numbers could reach 19,200 per day by Christmas if current trends continue. Germany is currently seeing around 2,000 new cases per day.

In Greece a dozen crew members have tested positive for the virus on board the cruise ship Mein Schiff 6. It was the first cruise to dock in Greece after the Covid-19 lockdown, and is currently moored off the Aegean island of Milos. Tests were carried out on 150 of the ship’s 666 crew members. Those who tested positive have now been isolated on board.

For telco operators, Microsoft makes its foray into 5G with Azure cloud

ivermectin 12 mg without a doctor

cialis over counter at walmart