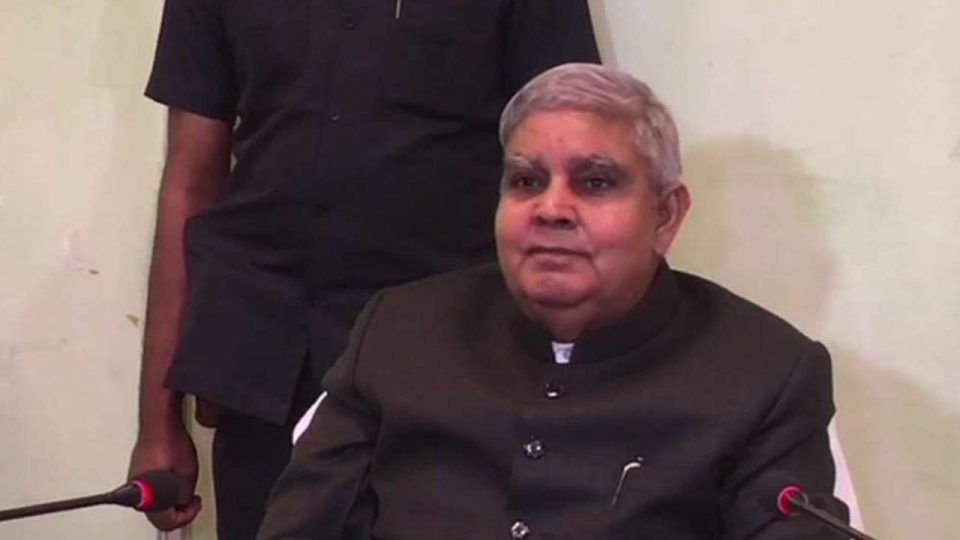 Governor Jagdeep Dhankhar on Monday claimed that the TMC government has turned West Bengal into a “police state” and said he would be forced to “look at” Article 154 of the Constitution, as his office has been ignored for long by the ruling dispensation. Article 154 of the Constitution mandates that the executive power of the state shall be vested in the governor and shall be exercised by him either directly or through officers subordinates to him.

Criticising DGP Virendra for “being irresponsible and callous” in his response to a letter, Dhankhar said police personnel are working as “cadres” of the ruling TMC in the state. “If the Constitution is not protected, I have to act. The office of the governor has been ignored for long. I will be forced to look at Article 154 of the Constitution,” he said at a press meet in Kolkata. The governor also said that “electronic surveillance by the TMC government” has forced him to communicate over WhatsApp voice calls.

“West Bengal has been turned into a police state…Police state and democracy cannot go hand in hand. Law and order has collapsed in the state. Maoist insurgency is raising its head. Terror modules are also operating from this state,” the governor added. Dhankhar, who has been at loggerheads with the TMC government ever since he assumed office in July 2019, had written to DGP Virendra earlier this month, expressing concern over the law and order in the state.

Following the DGP’s two-line reply, he had asked the state police chief to meet him by September 26. Chief Minister Mamata Banerjee, in a letter to the governor on September 26, urged him to “act within the mandates of the Constitution”, expressing anguish over his letter to the DGP.

Snapping back at Dhankhar over his “Article 154” remark, TMC MP Kalyan Banerjee said that he has never seen an “incompetent, inefficient, untolerable person holding such a constitutional post”.

“I am shocked to see the madness of @jdhankhar1, I have also never seen an incompetent, inefficient, untolerable person holding the constitutional post like @jdhankhar1. He is the number one constitutional violator of the country,” Banerjee tweeted.

“He has proved himself how a Governor can become a sweeper of @BJP4India. He is giving shelter for anti-socials belonging to @BJP4India at Governor house. Why every day @jdhankhar1 is holding press conferences and making tweets against the @WestBengalGovt. If he has the courage let him impose 356 against the @WestBengalGovt by tomorrow itself. Otherwise I will tell him the greatest coward of the world and number one puppet of the @BJP4India. This tweet is the answer for today’s press conference,” the TMC MP said in another tweet.

Meanwhile, senior TMC leader and West Bengal minister Subrata Mukherjee said “instead of demeaning the post he holds, he should take over as the BJP state president”.

ivermectin 12 mg without a doctor