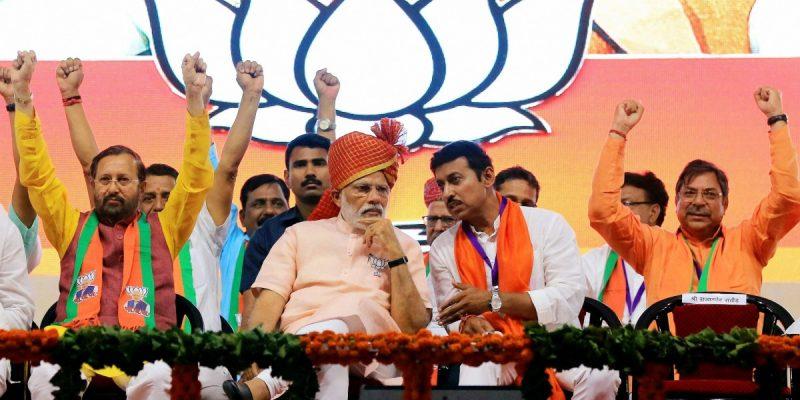 New Delhi | Abhinav Gupta: What started as a seemingly competitive contest between the Aam Aadmi Party and the BJP soon ended as a show of complete domination by Arvind Kejriwal’s party as votes were counted on Tuesday. Within hours, the picture came out clear bringing joy for the AAP and hopes turning into disappointment for the saffron party.

When AAP workers were celebrating the giant victory with blue and white balloons, buntings and giant cutouts of Kejriwal, the office of Delhi BJP wore a sombre look after the poll results dashed the party’s hopes of returning to power in the national capital after two decades.

While early trends showed the BJP leading in 19 seats, the counting ended with the party winning just eight seats – a slight improvement from its 2015 tally of three. The AAP, on the other hand, defied the anti-incumbency factor only to better the exit poll predictions, bagging 62 of the 70 seats in the city-state.

Talking about the AAP, party insiders as well as its detractors have attributed the massive victory to a slew of freebies announced by the Kejriwal government.

Within a few months before the elections, the Delhi government provided for a host of services to people either free of cost or at a highly subsidised rates. Major among these were free electricity up to 200 units of power and almost next to nil charges over that, free rides for women in public transport buses, up to 20,000 litres of free water per month and free pilgrimage for senior citizens.

But what needs to be noticed is a changed Kejriwal in 2020 from the one in 2015. A look back into his 2015 Delhi election campaign shows him frequently lashing out at Prime Minister Narendra Modi and squabbling with the LG over files.

Since then, Kejriwal’s approach underwent a complete rehaul and he stopped pitching himself against PM Modi. Instead, he aimed at projecting himself as the best bet for Delhiites by focusing more on governance.

The 51-year-old AAP convenor also selectively engaged with divisive issues like Citizenship Act and Shaheen Bagh. Refraining himself from endorsing the protests directly, he put the onus on the Centre to clear the blocked roads in Kalindi Kunj. Instead, he adopted the new political trend of temple run and recited the Hanuman Chalisa, declaring AAP as a “hardcore nationalist”.

On the contrary, the Delhi election was obviously a tough nut to crack for the BJP, firstly because of two reasons — one, it has been out of power in the national capital for more than two decades and second, it was up against a party which had delivered on its promises across all social welfare sectors.

BJP’s aggressive campaign in the national capital, which included over 6,500 public rallies by the party’s top brass failed to create an impact on the voters.

Led by Home Minister Amit Shah, the party’s canvassing theme focused on highlighting the Citizenship Act as a nationalistic move by the Centre and using the resentment against related protests in Muslim-dominated Shaheen Bagh to consolidate Hindu votes in its favour.

In the over three-week long high voltage campaign for the polls, the BJP leadership including Shah and party chief JP Nadda as well as PM Modi assailed AAP and Kejriwal over a host of issues including the Shaheen Bagh protest against the CAA and their alleged failure to come up with schools, hospitals and other facilities promised by them.

The Union Home Minister ended his election speeches by appealing to people to press the electronic voting machine (EVM) buttons with such anger that its “current” was felt at Shaheen Bagh.

However, the saffron party failed to gauge the Delhi electorate and ended up a distant second with just eight seats in the 70-member assembly.

A section of Delhi BJP leaders held that the party went “overboard” while focusing on its agenda of “Hindutva and nationalism” in the campaign.

Also, Shah – less than a year after leading the BJP to a landslide victory in the Lok Sabha polls – is believed to have found it difficult to find competitive faces who could take on AAP candidates and represent people of Delhi.

Other than the lack of a chief ministerial, some BJP leaders also cited organisational shortcomings, failure to reach out to voters in unauthorised colonies and JJ clusters, and differences of leaders in Delhi party unit as possible reasons for the party’s “humiliating” defeat.

With the defeat in Delhi, the BJP has lost six state elections in last two years. And that has come despite the resounding victory in the Lok Sabha polls. There are now 12 states, including Delhi, which are ruled by anti-BJP governments. The NDA now has governments in 16 states that account for 42 per cent of the nation’s population.

Also, the Delhi election result is likely to have a bearing on the upcoming elections – Bihar later this year and West Bengal in 2021.

Analyst believe that the BJP needs to change its approach and focus more on local issues than its nationalist pitch and also put forward state leaders who don’t just bank on the national narratives and PM Modi’s popularity.