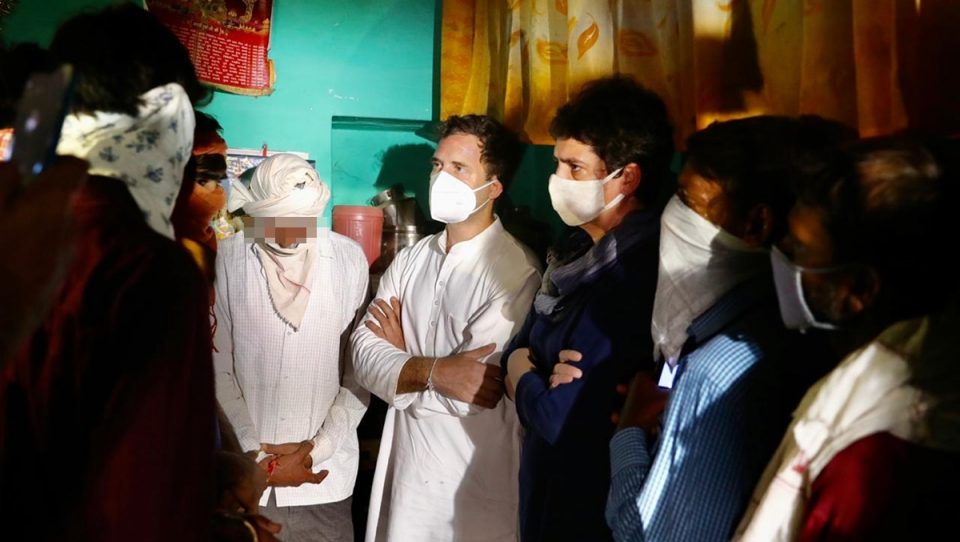 Hathras Case: Amid criticism of the government and police, top UP officials went to speak to the family; visuals showed them sitting cross-legged on the ground talking to grieving members

Congress MP Rahul Gandhi and party leader Priyanka Gandhi Vadra on Saturday met the family of the 20-year-old Dalit woman who was allegedly gang raped and murdered last month in Uttar Pradesh’s Hathras – and whose body was then cremated in a secretive ceremony at 2.30 am – in a savage crime that has shocked the nation.

“No force can silence us,” Mr Gandhi told the media after the meeting, vowing to keep up their pressue on the government till the family gets justice. “Wherever something wrong happens, we will be there to ensure justice is served. No one can stop us,” Priyanka Gandhi said.

The visit, involving a dramatic standoff with cops at the Delhi-UP border, was the Congress leaders’ second attempt – the first, on Thursday, ended in a tussle with cops who refused to let Mr Gandhi pass, citing orders banning large gatherings amid coronavirus concerns, and shoved him to the ground in the chaos that followed. Another opposition leader – Trinamool Congress’s Derek O’Brien – was also manhandled as he too tried to speak to the family.

A similarly dramatic face-off seemed in store today as Mr Gandhi set off from Delhi at around 2.30 pm in a silver Toyota Innova that Mrs Gandhi Vadra was driving. Their convoy consisted of around 30 Congress MPs, including Shashi Tharoor. Hathras is around 200 km from Delhi.

“Nothing in the world can stop me from going to Hathras to meet this unhappy family to share their pain,” he said before leaving, while she told news agency ANI: “If not this time, then we will try again”.

A massive force of around 200 cops – some in riot gear and wielding lathis – was deployed at the toll plaza along the Delhi-Noida Direct (DND) Flyover with definite instructions – do not allow Congress leaders to cross the border.

Visuals shared online by ANI showed huge numbers of cops and metal barricades, leading many to question where the cops were when needed to deal with crimes against women in the state.

In a slightly anti-climactic moment, however, a UP government that has been severely criticised for its handling of this tragic case – including its treatment of the young woman’s traumatised family, whom they allegedly locked up in their homes – seemed to give in to the pressure and allowed Rahul Gandhi, Priyanka Gandhi Vadra and two others – KC Venugopal and Adhir Ranjan Chowdhury – to cross.

The government had previously insisted that large gatherings – such as those of the Congress delegation – were not allowed in line with Covid management guidelines. These orders prohibit people from travelling in groups of more than five.

Meanwhile, top officials from the UP government and police – DGP HC Awasthy and Additional Chief Secretary (Home) Awanish Awasthi – went to Hathras today to speak to the family. Visuals showed the officials sitting cross-legged on the ground talking to grieving family members.

This was the first visit by high-ranking officials of the government and police since the alleged gang rape that took place on September 14.

The ruling BJP, which is under pressure over its apparent inability to prevent horrific crimes against women – at least two more assaults and rapes have been reported from the state since then – had earlier dismissed the Congress’s protests as a “political stunt”.

This morning Union Minister Smriti Irani hit out at Rahul Gandhi, accusing him of staging a visit to Hathras for political gain.

Chief Minister Yogi Adityanath, whose resignation has been demanded by activists and the opposition, made a declaration of his government’s commitment on Friday. “Those who even think of harming mothers and daughters in UP, their destruction is assured,” he tweeted in Hindi.

Furious protests against the police and the government have been staged across the country, including one in national capital Delhi on Friday, where Chief Minister Arvind Kejriwal made an appearance and demanded that the four accused be executed.

The Allahabad High Court has taken notice of the case and has summoned top officials of the government and police to appear before it on October 12.

In its notice, the court said the matter was of “immense public importance… involves allegation of high-handedness by state authorities, resulting in violation of basic human and fundamental rights”.