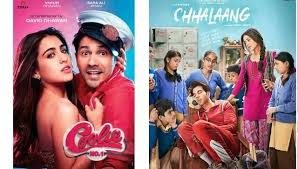 Amazon Prime Video will premiere nine movies which would have hit cinema halls had they not been shut down due to the coronavirus pandemic.

The upcoming Malayalam comedy film titled Halal Love Story is directed by Zakariya Mohammed and stars Indrajith Sukumaran, Joju George, Sharaf U Dheen, Grace Antony, Soubin Shahir and Parvathy Thiruvothu. According to the makers, Halal Love Story follows “a group of passionate filmmakers who come together to create a film that follows religious guidelines in every phase of filmmaking.”

The Karthik Saragur directorial stars Aravinnd Iyer, Aarohi Narayan, Priyanka Thimmesh, Achyuth Kumar and Aadya. The film is said to be an ode to food and family values.

Suriya’s next film Soorarai Pottru will release on Amazon Prime Video. The film is said to be inspired by the struggles of GR Gopinath, a retired Army captain, who founded low-cost airline Air Deccan. The film also stars Aparna Balamurali, Mohan Babu and Paresh Rawal in pivotal roles. Apart from starring in the movie, Suriya has also bankrolled the film along with Guneet Monga of Sikhya Entertainment. It will release in Tamil, Telugu, Kannada and Malayalam.

Hansal Mehta’s social comedy stars Rajkummar Rao and Nushrat Bharucha in the lead roles. Based in a small town in Haryana, it also features Mohammad Zeeshan Ayub and Saurabh Shukla. The project is produced by Ajay Devgn, Luv Ranjan and Ankur Garg.

Directed by Vinod Anantoju, the family drama is set against the backdrop of a middle-class family where a man dreams of owning a hotel in a town. Anand Deverakonda and Varsha Bollamma star in the lead roles.

The Bhumi Pednekar starrer is the Hindi remake of Telugu horror film Bhaagamathie. It follows the story of an innocent government officer who is made the victim of a major conspiracy involving powerful forces. The film is directed Ashok and presented by Akshay Kumar and Bhushan Kumar.

My family has been destroyed, Rhea Chakraborty’s mother Sandhya reveals she considered suicide