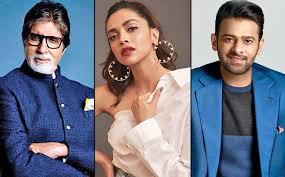 Bollywood superstars Amitabh Bachchan and Deepika Padukone will star with Telugu superstar Prabhas in a multi-lingual mega production for the big screen. The yet-untitled film is slated to release in 2022.

Bollywood superstar Amitabh Bachchan has joined the power-packed duo Deepika Padukone and Telugu superstar Prabhas in a multi-lingual mega production by director Nag Ashwin. The yet-untitled film is slated to release in 2022. In July this year, Prabhas and Deepika had made the big announcement that they will be coming together for a film which will be Prabhas’ 21st film. Now, the star cast has become more grande with Big B joining them. “I feel lucky and blessed that Bachchan Sir has selected our film among the many choices he has. It is a full-length role, which we believe will do justice to the legend that he is,” the film’s director Nag Ashwin said.

The multi-lingual film is backed by the South Indian production house Vyjayanthi Movies, popular for projects such as “Mahanati”, “Agni Parvatam” and “Indra”. “Shri NTR and I had watched the landmark film ‘Sholay’ several times when it ran for over a year at NTR’s Ramakrishna Theatre. After all these years, it is truly a glorious and immensely satisfying moment for me to welcome Indian cinema’s greatest icon, Shri Bachchan to be a part of this prestigious movie under our banner,” said Aswini Dutt, producer and founder of Vyjayanthi Movies.

This is the first time Prabhas collaborates with Big B or Deepika. The two Bollywood stars have earlier worked together in the films Aarakshan and Piku. Announcing the film with a video, Vyjayanthi Movies had earlier written, “As promised, here it is – our next big announcement! WELCOMING THE SUPERSTAR Heart suit.” While Deepika wrote, “Beyond Thrilled! Cannot wait for what we believe is going to be an incredible journey…”

Sharing his excitement and speaking about the project, Director Nag Ashwin had said, “I’m very excited to see Deepika play this character. It is something no mainstream lead has done before and will be quite a surprise for everyone. The pairing of Deepika and Prabhas will be one of the main highlights of the film and the story between them, I believe will be something audiences will carry in their hearts for years to come.”

My family has been destroyed, Rhea Chakraborty’s mother Sandhya reveals she considered suicide