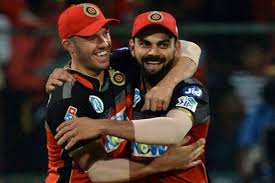 With two big wins on the trot, the recent coming against Kolkata Knight Riders with a massive 82-run victory agianst Sharjah on Monday, pushing them to the top three position in the points table with Mumbai Indians and Delhi Capitals; all locked at 10 points each.

The marauding show saw some great bowling performances from RCB bowling unit, largely dominated by Yuzvendra Chahal and Washington Sundar. However, it was AB de Villiers who turned to be the megastar of all with a cracking 33-ball 77.

Skipper Virat Kohli, who was a mere bystander in the partnership with the South African for third wicket, felt it was a superhuman performance from de Villiers as he started hitting the ball from word go while others, including Kohli, had to spend time on a Sharjah turf that was difficult to bat on.

“At the toss the pitch didn’t have the usual Sharjah sheen. Knew the wicket was going to get slower and slower. Barring one super-human, everyone struggled on that pitch,” Kohli said at the post-match presentation ceremony.

“I thought I had a few balls under my belt so I’ll start striking. But he came in and hit his third ball nicely. On a pitch like that, only AB can do that. It was a special knock. We got 195 purely because of the genius of that man.”

The skipper also heaped praise on his bowler for coming together and excel in the comprehensive win as they restricted KKR at a paltry 112/9.

“They’ve played good cricket in this IPL. Coming here, it was important to get the right start. Great to see individuals step up when the team requies. Bowling unit, with Morris coming in, looks all the more potent. Very happy,” said the winning captain.