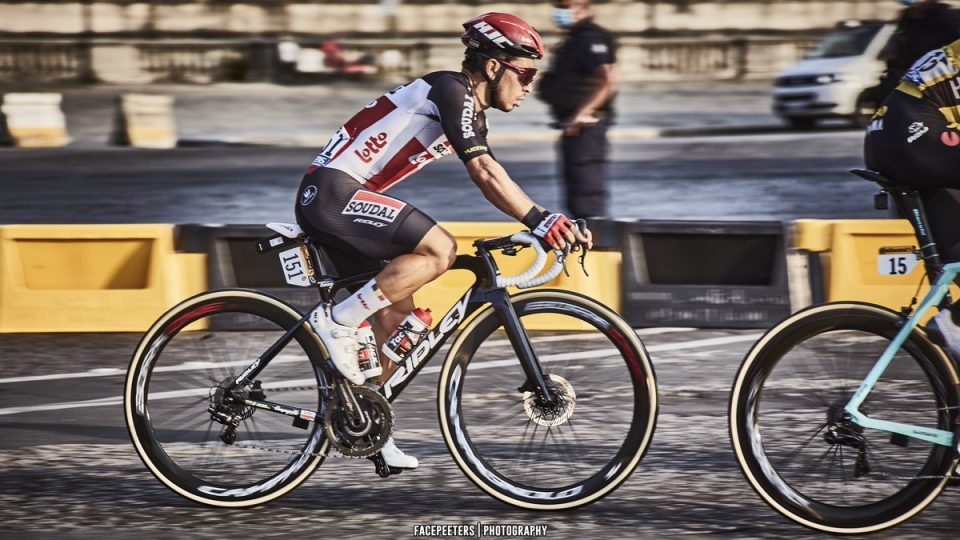 Caleb Ewan (Lotto Soudal) used his trademark late acceleration to surge away from his rivals and win Scheldeprijs on his debut in the sprinters’ Classic.

The Australian came off a UAE Team Emirates leadout and opened a significant gap before he hit the line and punished the air in celebration.

Pascal Ackermann (Bora-Hansgrohe) dived through the pack as they all opened up their sprint, sparking a crash behind him, with August Jensen (Riwal Securitas) going down hard, but reportedly not seriously injured. Ackermann was unable to match Ewan’s speed and crossed the line in second place, but was subsequently relegated for his actions.

Niccolò Bonifazio (Total Direct Énergie) tried to follow Ewan but he was blocked by other riders and could only fight for third place. He was promoted to second after Ackermann’s punishment, with Bryan Coquard (B&B Hotels-Vital Concept) moving to the podium in third place. Tim Merlier (Alpecin-Fenix) was fourth, Jasper Philipsen (UAE Team Emirates) fifth, and Sam Bennett (Deceuninck-QuickStep) only eighth after being caught out of position.

Mark Cavendish (Bahrain McLaren) was again in the early break of the race and finished 143rd, carefully taking his race number off his bike for what could be a special souvenir of the final race of his career, despite earlier explaining he hoped to race on in 2021.

“It’s one of the biggest sprint Classics there is and I haven’t won a Classic of this level in Belgium before, so this is super nice,” Ewan said happily, knowing the importance of winning Scheldeprijs for a sprinter and for his Belgian team.

“It’s important for me, to be honest, I think it’s more important for the team. We haven’t had a win in a Classics at this level for a long time, so they are going to be really happy. It’s my first time here and now my first win, so I’m super happy to have this on my palmares now.”

Ewan was alone amongst the sprinters in the final 500 metres after a Lotto Soudal teammate pulled off the front. Despite this being his debut at Scheldeprijs, he stayed calm and waited for his moment just as he did so successfully in the two sprints he won at the Tour de France.

“For me [the final kilometre] wasn’t too bad because I was up near the front the whole time and away from all the trouble. I just wanted to be up near the front, out of trouble, and that is what the team did for me,” he explained.

The riders gathered in Schoten under grey clouds, with cold but dry conditions for the 173km race. Instead of the start in Terneuzen in the Netherlands and a ride south towards Antwerp and Schoten, COVID-19 restrictions forced organisers to use a 17.3km circuit covered 10 times.

Barriers stopped crowds from seeing the riders at the start but some lined the circuit, with huge messages painted on the road for Cavendish and 2019 winner Fabio Jakobsen, who is slowly recovering from his Tour de Pologne crash injuries.

The early break formed quickly, with six riders jumping away. They were soon joined by two others, including Cavendish, after he confirmed pre-race that he had no intention to retire just yet even if he has still to secure a contract for 2021 at Bahrain, or elsewhere.

The seven attackers opened a 1:30 gap but Lotto-Soudal, Bora-Hansgrohe, Deceuninck-QuickStep, Alpecin-Fenix and UAE Team Emirates shared the chase, putting a rider on the front of the peloton.

Paris-Tours winner Casper Pedersen (Team Sunweb) crashed during lap two and retired, while soon after former world champion and Gent-Wevelgem winner Mads Pedesen (Trek-Segafredo) eased up and called it a day thinking of Sunday’s Tour of Flanders. Trek-Segafredo later said he had a slight tendon problem.

The laps ticked down at a steady pace with the break and the peloton riding steadily in a game of cat and mouse. Cavendish eventually eased up with 35km to go. He was applauded by the mechanic on the neutral service motorbike but waved away the television camera, avoiding an emotional end to his race.

The break pushed on without Cavendish, but the peloton was closing them down as the final lap approached. Askey kicked away as the bell rang to signal the last lap, but he only lasted a few minutes before the peloton swallowed him and the others as the sprint teams began to fight for position.

The final lap was covered at over 50 km/h with Deceuninick-QuickStep dominating the peloton as they tried to set up Sam Bennett. However a squeeze in the road with 1.6km to go and then a subsequent chicane shuffled the peloton, with Alpecin-Fenix hitting the front to try to set up Tim Merlier and then Trek-Segafredo trying to take over for Edward Theuns.

However they committed too much and too early, with Alexander Kristoff (UAE Team Emirates) moving past them to hit the front as he lead out Jasper Philipsen in the final 500 metres.

Philipsen and Ewan opened their sprints at the same moment, but Ewan was far faster and surged clear to victory. Philipsen clashed with Bonifazio along the barriers and eventually waved his arm in protest, however, Ewan was well ahead of both of them and able to celebrate a dominant sprint victory on his debut at Scheldeprijs.

Not at all like Gautam Gambhir, Sehwag backs Virat Kohli to remain on as RCB chief

I love what you guys are up too. This type of clever work and coverage!

Keep up the awesome works guys I’ve added you guys
to my own blogroll. https://tadalafili.com/

I have read so many content about the blogger lovers except
this piece of writing is actually a pleasant paragraph,
keep it up. http://herreramedical.org/viagra

When I initially left a comment I seem to have clicked the -Notify
me when new comments are added- checkbox and from now on each time
a comment is added I recieve 4 emails with the same comment.
Is there a way you can remove me from that service? Many thanks! http://antiibioticsland.com/Tetracycline.htm

I need to to thank you for this fantastic read!!
I definitely loved every little bit of it. I have you saved as a favorite to look at new
stuff you post http://ciaalis2u.com/

Tremendous things here. I am very happy to look your post.
Thanks so much and I’m taking a look ahead to contact you.
Will you please drop me a mail? http://harmonyhomesltd.com/Ivermectinum-tablets.html

all the time i used to read smaller content which also clear their motive,
and that is also happening with this paragraph which I
am reading at this time. http://harmonyhomesltd.com/Ivermectinum-pharmacology.html

Everyone loves it when folks come together and share opinions.
Great blog, stick with it! http://antiibioticsland.com/Zithromax.htm

Link exchange is nothing else however it is simply placing the other person’s blog link on your page at
proper place and other person will also do similar
for you. http://herreramedical.org/albuterol