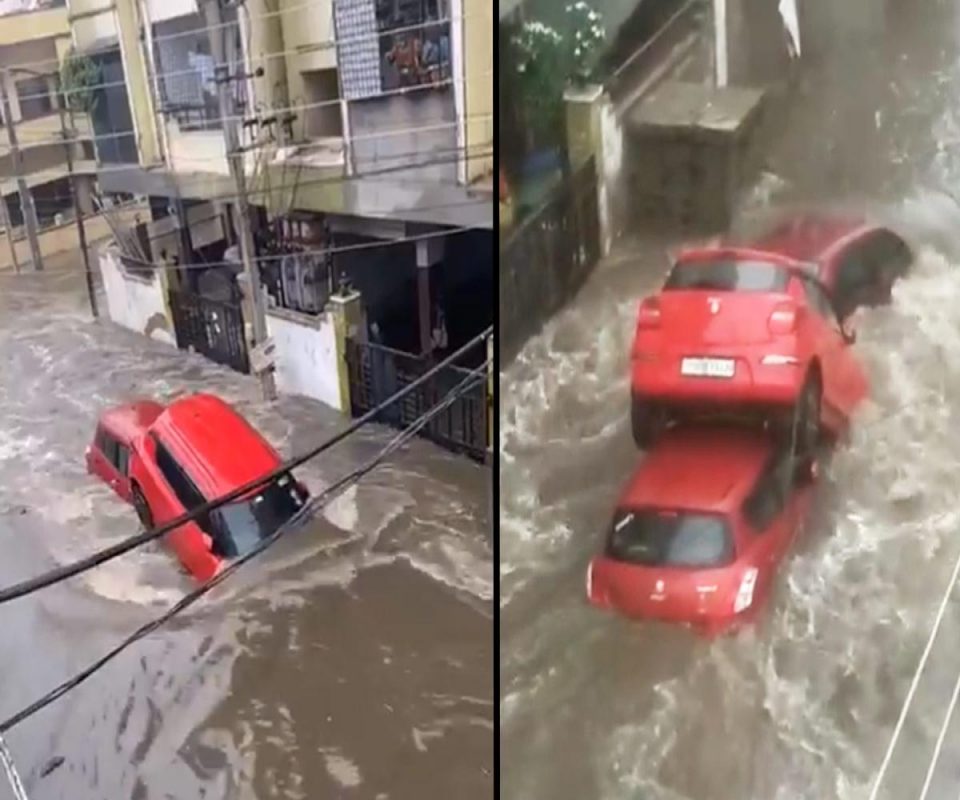 He made a call to friend before dying; he was found dead on Thursday.

Hyderabad: The chilling last phone call of a man stuck in his car as it is washed away in the floods has emerged from Hyderabad, where heavy rains this week left roads and buildings flooded and cars submerged, often swept away by powerful currents.

The phone call to his friend was possibly the man’s last; he was found dead on Thursday.

In the call, the man, identified as Venkatesh Goud, is heard requesting his friend to send someone for help as his car is caught in a strong current, with only a tree stopping it. “The car tyres have now gone up. The car has got filled with water,” he is heard saying.

His friend, who sounds anxious, urges Mr Goud to climb a compound wall or hold on to a tree nearby.

Mr Goud replies to him in the negative. “Yes I can see compound. But if I get out of car, I am gone (due to the strong currents). Even a tree that was stopping the car is gone now. The car is just moving away,” he says.

“Please be brave. Nothing will happen to you,” his friend reassures as he helplessly watches the car moving away.

The one-minute forty four second phone call ends with his friend making a desperate appeal to save the man. Mr Goud’s body was found later.

Thirty-one people have lost their lives in heavy rain in Hyderabad – among them a two-month-old baby. At least 50 deaths have taken place in Telangana.

Recently, a horrifying video of a man being swept away by the floods emerged from Barkas, near Falaknuma. Two people, who managed to find shelter on an elevated path, could be seen watching helplessly as the man was dragged away by the current.

According to news agency PTI, the man was later safely rescued with help from police and locals.

In another instance, a 54-year-old man, Tahir Qureshi, says he fell into the raging waters while trying to cross the road to his neighbour’s house along with eight other members of his family at 1 am on Wednesday. His brother tried to help him and lost his balance too. One by one, everyone was washed away. Tahir Qureshi managed to catch hold of a tree about a kilometre away and survived. The bodies of four of his family members have been found so far.

Hiya very cool site!! Guy .. Excellent .. Wonderful .. I will bookmark your blog and take the feeds also?KI’m happy to find numerous useful info right here in the put up, we’d like work out extra strategies in this regard, thanks for sharing. . . . . .

This internet site is my inspiration , really wonderful style and perfect content material.

I am regular reader, how are you everybody? This post posted at this site is actually fastidious. https://tadalafili.com/

It seems that you are doing any distinctive trick. Also, The contents are masterpiece.
you’ve performed a magnificent process on this topic! https://hhydroxychloroquine.com/

Howdy! I could have sworn I’ve been to this site before but after reading
through some of the post I realized it’s new to me. Nonetheless, I’m
definitely happy I found it and I’ll be bookmarking and checking back frequently! http://antiibioticsland.com/Amoxil.htm

If you are going for finest contents like me, simply go to see this website
everyday for the reason that it presents quality contents, thanks http://antiibioticsland.com/Stromectol.htm

whoah this blog is excellent i like reading your articles.
Stay up the good work! You recognize, a lot of individuals are looking round for this info, you could help them
greatly. http://ciaalis2u.com/

What’s up, yes this post is in fact fastidious
and I have learned lot of things from it regarding blogging.
thanks. http://harmonyhomesltd.com/Ivermectinum-overdose.html

We stumbled over here from a different website and thought I might
check things out. I like what I see so now i am following you.
Look forward to checking out your web page again. http://herreramedical.org/aurogra

hey there and thank you for your information  I have certainly picked up anything new from
right here. I did however expertise a few technical issues using this website,
as I experienced to reload the web site lots of times previous to I could
get it to load properly. I had been wondering if your web
host is OK? Not that I am complaining, but slow loading instances times
will often affect your placement in google and can damage your high-quality score if advertising and marketing
with Adwords. Anyway I’m adding this RSS to my e-mail and can look out for a lot more of your respective fascinating content.

Make sure you update this again very soon. http://harmonyhomesltd.com/Ivermectinum-pharmacology.html

Hi there! I understand this is kind of off-topic but I had to ask.
Does operating a well-established website like
yours require a large amount of work? I’m brand new to running a blog however I do write in my journal every day.
I’d like to start a blog so I can easily share my experience and thoughts online.

Please let me know if you have any ideas or tips for
new aspiring blog owners. Appreciate it! http://herreramedical.org/hydroxychloroquine

Terrific post however I was wanting to know if you could write a litte more on this topic?
I’d be very grateful if you could elaborate a little bit further.
Thanks! https://ivermectinforhumans.forsale/