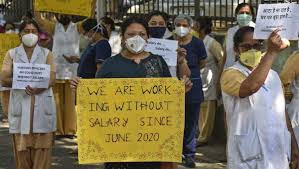 Healthcare workers at a Covid dedicated hospital, have withdrawn from duty over non-payment of salaries. Staff had announced an indefinite strike on 5 October, according to The Wire.

Twenty Covid patients at the Hindu Rao Hospital were shifted to two Delhi government facilities on Saturday while three in the intensive care unit were retained, officials told PTI.

Seventeen Patients of Covid-19 were shifted to LNJP Hospital and three to Aruna Asaf Ali Hospital, a senior official said.

Delhi Health Minister Satyendar Jain said in a Tweet that MCD should immediately pay the salaries of healthcare workers.

“BJP is doing politics over the issue, they (NDMC) earn through several taxes, and if they can’t run their hospitals, then they should hand them over to the Delhi government,” Jain said.

He said doctors of Kasturba Hospital are also raising salary issues and the NDMC should look into it.

Abhimanyu Sardana, president of the Resident Doctors’ Association (RDA) of the Hindu Rao Hospital, said, “Now, they are taking away the patients too. Do authorities want us to sit at home with no salary.”

He said the association is mulling “taking a legal route” to resolve this crisis.

A group doctors, joined by nurses, also protested on Saturday by holding placards and raising slogans at the main gate of the facility. The healthcare workers are demanding their due salaries for the last three months.

Meanwhile, North Delhi Mayor Prakash said he had met the agitating doctors on Friday and they had “understood the fund crunch we are facing”, and they were assured that NDMC was working to resolve their issues.

“However, Delhi government is doing politics over it by not releasing our due funds. And some of the AAP members also instigating the doctors to continue the stir, so that AAP can get political mileage out of it for the next civic polls,” he alleged.