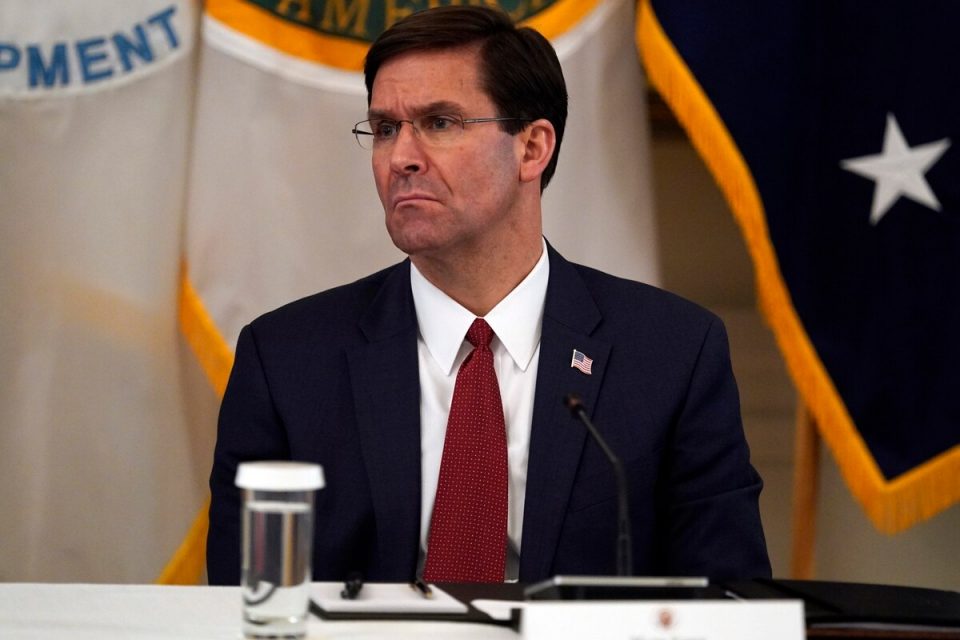 The first, James Mattis, had resigned over policy differences with the president about troops in Syria.

“I am pleased to announce that Christopher C Miller, the highly respected Director of the National Counterterrorism Center (unanimously confirmed by the Senate), will be Acting Secretary of Defense, effective immediately,” president said on twitter.

“Chris will do a GREAT job! Mark Esper has been terminated. I would like to thank him for his service.”

Esper had only two months, as does Trump who lost the election to Joe Biden, the president-elect.

Esper had clashed with Trump over his suggestion of using military personnel to quash civic unrest.

Trump, who is pursuing so far flimsy claims of election fraud in the courts, has only until January 20 before he has to leave office and Biden takes over.

Esper’s departure could foreshadow a broader post-election purge of appointees who displeased the president. It also means Trump will have seen the departure of two confirmed defence secretaries in less than two years.

While Esper, 56, had worked with the president on controversial priorities such as sending US troops to the border with Mexico and drawing down forces in Germany, Afghanistan and Syria, the president voiced increasing dissatisfaction with his Pentagon chief in recent months.

Trump said privately in August that he planned to replace Esper after the election, according to people familiar with the discussions, while the defence secretary told people close to him that he intended to leave regardless of the election’s outcome.

The president was frustrated that Esper, who became secretary in July 2019 after serving as Army secretary and as a former executive at Raytheon Technologies Corp., didn’t do more to publicly defend him on key issues, including Trump’s rejection of reports that Russia paid Taliban fighters “bounties” for the killing of U.S. troops in Afghanistan.

Trump has increasingly sought overt signs of loyalty and a willingness by his top aides to engage in partisan fighting, as demonstrated by Secretary of State Michael Pompeo’s making of a video in support of the president while on an official trip to Jerusalem for the president’s behalf at the Republican National Convention in August.

Trump was also angered that Esper in June publicly opposed the idea of deploying active-duty military to contain nationwide protests over racism. He confronted his defense secretary June 3 at the White House after Esper held a news conference in which he said that using active-duty military forces to perform law enforcement within the US is “a matter of last resort” and that the National Guard was better-suited to the task, people familiar with the matter said.

The president again signalled fatigue with Esper on August 15, when he used a derogatory nickname for his defense chief meant to suggest he’s a yes-man.

When asked if he was considering firing Esper, the president replied, “I consider firing everybody. At some point that’s what happens.”