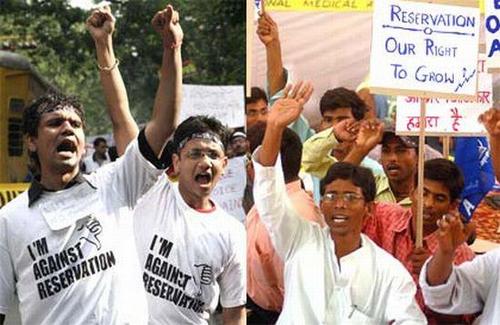 From the available reports, perhaps, it can be seen that lapses from Pune’s administration led to more violence.

The Maharashtra caste violence has been in the headlines since the last few days. Leftist journalists are portraying Jignesh Mevani, Omar Khalid as great young leaders fighting for the welfare of Dalits, while Hindutvawadi leaders Ekbote and Bhide are painted as villains, even when there’s no evidence to prove so. Let’s take a look at the lesser focused facts.

Just a few minutes away from Bhima-Koregaon area is the Vudhu Budruk village that is home to the tomb of Govind Gopal Mahar.  According to some historians, he’s the one who had performed Sambhaji Maharaj’s last rites even after knowing that he might face Emperor Aurangzeb’s ire. However, some groups of historians have challenged this claim.

Unfortunately, removal of a board highlighting this tomb triggered violence between Marathas and Dalits before few days. Dalits had registered cases under SC/ST Atrocity act against upper caste individuals who are said to remove the concerned board. So, on January 1, when Dalits entered Bhima-Koregaon memorial area, the atmosphere was already tensed. Stones were pelted on people who came to visit the memorial and to condemn this incident, Prakash Ambedkar, as well as other Dalit outfits, declared peaceful protests. But, unfortunately, protests were violent, public and private properties were destroyed. Protestors even attacked Kolhapur’s Amba Mata Temple as per reports.

According to a report from Pune Mirror, casteist outfit Sambhaji Brigade (linked with the NCP, and often organizes protests to abuse Brahmins openly) played a role in distorting historical facts and brainwashing people in Bhima-Koregaon area. Not even one mainstream media channel is talking about Sambhaji Brigade’s role. All are busy terming Milind Ekbote and Sambhaji Bhide as terrorists even when both of them have challenged Prakash Ambedkar as well as others to submit evidence against them in the court.

Very little has been discussed regarding Pune Police and Guardian Minister Girish Bapat’s failure in controlling the situation. Few reports point out how Pune Police failed to gauge the level of tension amongst villagers in the Bhima-Koregaon and nearby areas.  But, this was not the first mistake; their judgment regarding the impact of ‘Elgaar Parishad’ event held on December 31, 2017, also went wrong.

Multiple organizations had objected to the political nature of the event

Times of India’s recently released report has pointed out how some leaders connected to Naxalites attended the Elgaar Parishad event and possibly triggered the statewide agitation.

Multiple organizations and individuals from Pune, including Peshwa’s descendent Udaysinh Peshwe, Milind Ekbote, Akhil Bhartiya Brahman Mahasangh and outfit called Agniveer had objected to the fact that Shaniwar Wada should not be used for such event which is political.  The Pune Municipal Corporation does not allow the use of the historically significant site for political activities.

The involvement of Jignesh Mevani and Umar Khalid made it political. Plus, the event’s pamphlets clearly said RSS and BJP are the new Peshwas who need to be defeated.

Milind Ekbote’s letter sent to the PMC Mayor as well as Police Commissioner clearly stated that no one has issues with celebrations at Bhima-Koregaon celebration, but allowing Umar and Jignesh to speak at the Shaniwar Wada event may lead to problems.

The letter sent by an outfit called Agniveer to the Pune Police, and Dy Collector also pointed out the same.  Even Jan Satyagraha had published one write-up about possible attempt from ultra-left forces to hijack the event.

In spite of so many objections, Pune Police and city’s guardian minister Girish Bapat allowed the organizers to let Mevani and Khalid spread their venom with hate speeches. He personally monitored all the arrangements with bureaucrats like police chief Rashmi Shukla, Pune Rural SP-Mohammed Suvez Haque, and Pune Zilla Parishad’s CEO Suraj Mandhare.

“Pune police could have learned something from the UP police that canceled Mevani and Khalid’s speech recently.  Mevani, Khalid, and other notorious elements were called to participate in the event. These are not even Maharashtrians; it should have triggered the sixth sense of Pune Police’s intelligence team. Mevani is a person who had openly asked Dalits to not to chant Jai Shri Ram and shout Allah Hu Akbar instead.

As surety for his good behavior, they could have issued notice under section 109 in CRPC.  Even on the day when Elgaar Parishad was conducted, police could have arrested Jignesh Mevani under section 151 CRPC to stop him. Later, they could have issued Section 41A notice to the organizers of the event on December 31 to derail them from continuing their notorious activities on the next day. Lastly, the state administration should have learned from its opponents’ failure to control Azad Maidan Riots in 2012. The preventive measure could have been much better. Now, even though they have filed the FIR against both, police may find it difficult to get witnesses who would give statements against Mevani,” said Mumbai-based Advocate Anand Pande while sharing his opinion on the issue.

He also pointed out that Maharashtra has a sizeable Dalit population. Perhaps, the state government allowed both of them to speak due to political compulsion as the state is set to face elections next year.  A lot of public property was damaged, most importantly; state’s social fabric has been destroyed.

“The state administration could have avoided the Bhima-Koregaon violence as well as the violent protests that the state witnessed. Some people follow the British-mentality and aim to break Maharashtra for political gains. The state government could have acted swiftly to stop the same, but their only aim is to win 2019 elections. They lacked the courage to control the violence. So, they simply calmly watched. Their vote politics allowed the state to burn,” said Shiv Sena MP Sanjay Raut in his editorial published by Saamana recently.  The Rajya Sabha MP’s statement sounds logical as of now.

Pune Police, under the leadership of Mrs. Shukla, has denied permission for several protests and events in the past. They did so even when residents of Pune’s Deccan Gymkhana area wanted to organize a protest against police for their failure in controlling the increasing number of burglaries in the area. Pune Police was also quick to file cases and arrest citizens who displayed posters highlighting traffic police’s corruption. But the same force has not issued an apology for their lapses in handling Mevani. In fact, no case was registered on suo-moto basis against the organizers of the event even after the hate speech was delivered. This shows their ignorance and arrogance as well.

As the Maharashtra state does not have a full-time home minister, the guardian minister plays a vital role in making decisions related to law and order as well.  Hope the state’s chief minister looks into the issue seriously and asks Bapat as well as all the involved bureaucrats for an explanation regarding their arrogant and ignorant approach. He should also recover the damages caused during riots from Prakash Ambedkar and all the others who triggered violence in the name of peaceful protests.