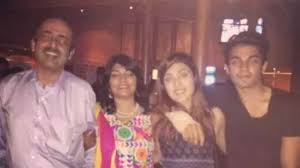 Actress Rhea Chakraborty on Wednesday was granted bail by the Bombay High Court in a drugs case related to her boyfriend Sushant Singh Rajput’s death. After spending 28 days in jail, Rhea finally stepped out of the Byculla women’s prison around 5.30 pm. After her return, there were many who raised questions as to what affect the current scenario had on the young actress’s mind. Well now, her mother Sandhya has finally opened up about the same in an interview with Times Of India. Speaking about the same, she said that ever since her children got arrested, she hasn’t been able to sleep or eat properly. Not only this, but she even gave a shocking statement and her family has been destroyed and the only way she thought to end this was by committing suicide.

Sandhya while speaking about her daughter who has been standing tough told TOI, “What she has gone through… how will she heal from this? But she is a fighter and she must be strong. I’ll have to put her on therapy to help her get over this trauma and reclaim her life.”

Speaking about how Rhea reacted and said after returning home, Sandhya said, “Yet, even after she came home today, she looked at us and said: ‘Why do you look sad, we have to be strong and fight this.’”

While the family took a sigh of relief after Rhea’s bail, their tensions did not end as her brother Showik remains incarcerated. Sandhya told the portal, “While it’s a relief she’s out of prison, it’s crazy it’s still not over. My son is still behind bars and I’m paranoid about what tomorrow will bring.” She added, “I can’t sleep on the bed anymore when my children are suffering in jail. I can’t eat. I wake up in the middle of the night, gripped by a fear of the next thing that could go wrong.

My family’s not just been pushed to a corner, it’s been destroyed. At one point I thought the only way to end it was by ending my life. I’m not this kind of a person, you know. I’ve sought therapy for myself. Now when these feelings appear, I keep reminding myself I need to be there for my children. They’re going through far worse.”

This isn’t the first time that the family has issued a statement as previously after Showik’s arrest, his father Indrajit Chakraborty, a retired Lieutenant Colonel from the Army, said, “Congratulations India, you have arrested my son, I’m sure next on the line is my daughter and I don’t know who is next thereafter. You have effectively demolished a middle class family. But of course, for the sake of justice everything is justified. Jai hind.”

While granting Rhea bail on a personal bond of Rs one lakh, the court asked the actor to appear before the Mumbai police for 10 days and before the Narcotics Control Bureau (NCB, which had arrested her) once a month for the next six months. Justice Sarang Kotwal of the HC also granted bail to

The court also rejected the bail plea of alleged drug peddler Abdel Basit Parihar. The HC observed in its order that Rhea did not have any criminal antecedents, and it was unlikely that she would tamper with evidence or affect the probe while out on bail. Rhea, however, can’t leave Mumbai without the NCB’s permission and for traveling outside the country, she will need permission from the special NDPS court here, the HC said.

Rhea’s lawyer Satish Maneshinde said that “truth and justice have prevailed”. “The hounding and witch-hunt by three central agencies–the CBI, ED and NCB –of Rhea should come to an end. We remain committed to truth,” he said

Rajput, 34, was found hanging at his apartment in suburban Bandra on June 14. After a case of alleged abetment of suicide was registered against Rhea by Rajput’s parents, a parallel probe into alleged drug procurement by her also began on the basis of her WhatsApp chats.