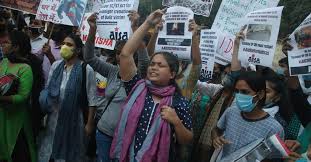 Family members of the Hathras woman who died after being allegedly gang-raped appeared before the Allahabad High Court on Monday and their lawyer said they wanted the case shifted out of Uttar Pradesh.

Family members of the Hathras woman who died after being allegedly gang-raped appeared before the Allahabad High Court on Monday and their lawyer said they wanted the case shifted out of Uttar Pradesh. Deposing before the Lucknow bench of the high court, Hathras District Magistrate Praveen Kumar Laxar said there was no pressure from the state government to conduct the victim’s cremation in the middle of the night, implying that the local authorities took the controversial decision.

He said the decision was taken due to law and order considerations, an argument challenged by the counsel for the victim’s family.

Justices Pankaj Mithal and Rajan Roy fixed November 2 as the next date of hearing.

The 19-year-old Dalit woman died at a Delhi hospital a fortnight after she was allegedly raped by four upper-caste men at her village in UP’s Hathras district on September 14.

There was outrage over her hurried cremation at her village with her family claiming that it was against their wishes and they were not even allowed to bring the woman’s body home one last time.

The high court had summoned top UP administration and police officials as well as the victim’s family to depose before it.

Her parents and three brothers were brought amid tight security to Lucknow on Monday.

The UP Additional Chief Secretary (Home) Awanish Awasthi, Director General of Police HC Awasthy and Additional Director General (Law and Order) Prashant Kumar also appeared before the court, which had said it was “shocked” by the incident when it issued the summons.

The Hathras District Magistrate and Superintendent of Police Vineet Jaiswal too were in court.

Seema Kushwaha, the counsel for the family members, told reporters that they wanted the case to be transferred out of the state.

“The family wants the case to be transferred to Delhi or Mumbai,” Kushwaha said outside the court. The family also asked that they should provide security, she said.

They also did not want the report of the investigation so far to be made public, according to the lawyer.

Additional Advocate General VK Shahi, who represented the state government, told reporters that the next date of hearing has been fixed for November 2.

“On behalf of the government, we have filed our affidavit. All family members of the victim appeared in court, and the court questioned them. The court questioned Additional Chief Secretary (Home), ADG Law and Order and District Magistrate of Hathras,” he said.

The family’s lawyer said the state authorities were asked about the hurried cremation and they cited law and order.

She claimed there is proof that there were only 50-60 relatives and villagers while 300-400 police personnel were deployed, arguing that they could have controlled any situation.

The lawyer said the district’s borders were also sealed and there was no law and order issue.

Multi-layered security was visible outside the court complex ahead of the court hearing.