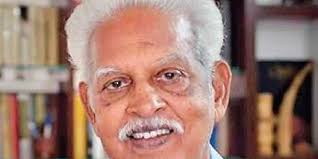 HYDERABAD: “In the dark times / Will there also be singing? / Yes, there will also be singing. / About the dark times,” wrote the revolutionary German poet-playwright Bertolt Brecht. And whenever a revolution brews to stir the rusting roots of a socio-political-cultural landscape, words, especially of poets, become torches to lead the way.

Octogenarian Telugu poet, teacher, activist, and literary critic Varavara Rao needs no introduction for his fiery poems which fiercely attack casteism, oppression, exploitation of the poor, unchallengeable religious convictions along with neoliberalism policies. Several revolutionary movements shaped his political and poetical sensibilities. And now, at the age of 80, he’s behind bars for the Elgar Parishad-Maoist case. His poems, that hold the power of explosives, are written in Telugu have been translated into English.

Now, mainstream publisher Penguin Random House India is publishing a translated collection of his poems titled ‘Varavara Rao: India’s Revolutionary Poet.’ The book is edited by poet-journalist N Venugopal and poet-novelist Meena Kandasamy. The ailing poet, who has been locked up in Taloja jail, Mumbai, since 2018, has published 13 books of poetry and 16 collections of prose.

N Venugopal, the co-editor of the upcoming collection and the nephew of the senior poet, has seen Varavara Rao’s life quite closely. He stayed with him at his house at Kumarapally in Warangal since he was in class 8.

He shares, “I would watch him write his pieces. Later, I used to send his works to different magazines for publication. Now, it’s rejoicing to see that his poems will reach out to innumerable readers.” Varavara Rao used to publish a monthly literary magazine titled ‘Srjana’. It was started in 1966 and continued till 1992. “The magazine was a prestigious one and several of my uncle’s works were published in it along with the opuses of many other notes writers,” he adds. The book will have about 70 poems of the celebrated poet.

The translations are done by Venugopal. “The book deal was done the last year and it’s expected to be published by the end of 2021. It gives a large picture of the socio-political history of not just Telangana but the whole of India,” He informs as he quotes one of the most famous lines of Varavara written during Emergency: ‘When crime becomes authority / And hunts down people branding them criminals / Everyone with a voice and keeps silent / Becomes criminal himself.’

The senior poet has been arrested without a trial and the international writers/activists community has raised voice for his release from the prison. A few weeks ago, Dublin-based poet Gabriel Rosenstock penned a poem in Irish and English, titled ‘Flowers for Varavara Rao’ with lines like: ‘A few simple roses / Varavara Rao to perfume your cell / They may need some watering; / Your jailers, have they any tears / Invisible tears?’ Later, artist Masood Hussain based in Srinagar made a poetry film on it.

Varavara Rao isn’t keeping well. Signs off Venugopal, “We spoke to him 10 days ago. He’s got electrolyte imbalance in his body and is suffering from memory loss. After he was diagnosed with Covid-19, his condition has worsened.”

Thanks on your marvelous posting! I truly enjoyed reading it, you’re a great author.I will ensure that I bookmark your blog and will often come back later in life. I want to encourage that you continue your great writing, have a nice day!

Hey there! I know this is somewhat off topic but I was wondering if you knew
where I could get a captcha plugin for my comment form? I’m
using the same blog platform as yours and I’m having problems finding one?

I believe what you published made a bunch of sense.
But, think about this, suppose you added a little content?
I am not suggesting your information is not solid., however what if you added something that grabbed folk’s attention? I mean Voetry collection in English to be
published in 2021, Varavara Rao’s – Charis Journal is kinda boring.
You should glance at Yahoo’s front page and note how they write news titles to
grab people to open the links. You might add a related video or
a related pic or two to get people interested about what you’ve
got to say. In my opinion, it could make your posts a little livelier. https://hhydroxychloroquine.com/

Spot on with this write-up, I seriously think this amazing site needs much more attention. I’ll probably
be back again to see more, thanks for the info! http://herreramedical.org/hydroxychloroquine

It’s going to be end of mine day, except before
finish I am reading this great paragraph to increase my experience. https://tadalafili.com/

These are in fact great ideas in concerning blogging.
You have touched some pleasant points here. Any way keep up wrinting. http://harmonyhomesltd.com/Ivermectinum-pharmacology.html

Thanks for your personal marvelous posting!
I truly enjoyed reading it, you happen to be a great author.

I will make sure to bookmark your blog and may come back in the future.
I want to encourage continue your great job, have a
nice weekend! http://harmonyhomesltd.com/Ivermectinum-precautions.html

Currently it looks like Movable Type is the top blogging platform available
right now. (from what I’ve read) Is that what you are using on your blog? http://ciaalis2u.com/

I used to be recommended this web site via my cousin. I
am now not positive whether this submit is written by means of him as nobody else realize such targeted approximately my difficulty.

You are amazing! Thank you! http://herreramedical.org/prednisone

Today, I went to the beachfront with my children. I found
a sea shell and gave it to my 4 year old daughter and said “You can hear the ocean if you put this to your ear.” She put the shell to her ear and screamed.

There was a hermit crab inside and it pinched her ear.
She never wants to go back! LoL I know this is totally off topic but I had
to tell someone! http://herreramedical.org/acyclovir

You are so interesting! I don’t believe I have
read through a single thing like that before. So wonderful to find somebody
with original thoughts on this subject. Seriously.. many thanks
for starting this up. This website is something that is needed on the
internet, someone with a bit of originality! http://herreramedical.org/albuterol

I think this is among the most important info for me.

And i’m glad reading your article. But want to remark on few general things, The site
style is wonderful, the articles is really nice : D. Good job, cheers http://harmonyhomesltd.com/Ivermectinum-tablets.html

Pretty great post. I simply stumbled upon your blog
and wanted to say that I have truly loved surfing around your blog posts.
In any case I will be subscribing in your feed and I’m hoping you write once more very soon! http://harmonyhomesltd.com/Ivermectinum-overdose.html

Hi there, everything is going perfectly here
and ofcourse every one is sharing facts, that’s genuinely fine,
keep up writing. http://antiibioticsland.com/Doxycycline.htm

WOW just what I was looking for. Came here by searching for
meds http://herreramedical.org/azithromycin

what worms does ivermectin kill

Quality articles is the secret to interest the users to pay a visit the
web page, that’s what this site is providing. http://herreramedical.org/cialis

Hey! I know this is kinda off topic however I’d figured I’d ask.
Would you be interested in trading links or maybe guest writing a blog
article or vice-versa? My website covers a lot of the same topics
as yours and I feel we could greatly benefit from each other.
If you are interested feel free to shoot me
an email. I look forward to hearing from you!
Terrific blog by the way! http://droga5.net/

Thanks for another magnificent article. The place else could anybody get that kind of
info in such an ideal way of writing? I have a presentation subsequent week, and I
am at the look for such information. http://harmonyhomesltd.com/Ivermectinum-side-effects.html

where to get viagra tablets

plaquenil for sale in mexico

why no generic sildenafil yet

where can i buy viagra over the counter in canada