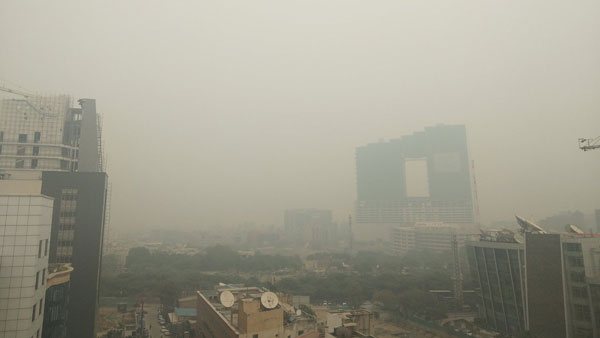 Delhi’s sir quality fell to the “very poor” category on Monday, post Dussehra celebrations. Data from the Central Pollution Control Board showed the Capital’s overall air quality index at 343 on a scale of 500.

Early morning visuals from India Gate showed a thick blanket of smog as people set out on walks.

On Sunday, Delhi’s air quality index was in the “severe” category in least three areas, according to Hindustan Times. Patparganj, India Gate and Dwarka areas showed a sharp rise in PM 2.5 and PM 10 levels.

A large number of farm fires were observed over Punjab, Haryana and Uttar Pradesh, reported PTI. The contribution of stubble burning to Delhi’s PM2.5 concentration was 19% on Sunday, said the Ministry of Earth Sciences’ air quality monitor, SAFAR. It added that the wind direction and the wind speed is favorable to transport the pollutants from the farm fires in the neighboring regions.

Scientists at the India Meteorological Department said that pollution levels in the Capital were likely to remain “very high” till Tuesday, Hindustan Times reported. They also warned that the effect of wind speed, which could help reduce pollution levels, may be negated by stubble burning in Punjab and Haryana.

Delhi’s air pollution typically worsens during the winter months from October to December. Last Monday, the Environment Pollution (Prevention and Control) Authority on Monday asked the Uttar Pradesh and Haryana governments to be ready to shut down thermal power plants that do not meet requirements laid down in 2015. On the same day, Delhi Chief Minister Arvind Kejriwal urged Union Environment Minister Prakash Javadekar to hold monthly meetings on pollution with the chief ministers of Delhi, Uttar Pradesh, Haryana and Punjab.

Earlier this month, Delhi Pollution Control Committee had banned the use of electricity generator sets of all capacities – whether running on diesel, petrol or kerosene – in order to curb the pollution. The committee had also declared the whole of the Union Territory of Delhi as an Air Pollution Control Area.