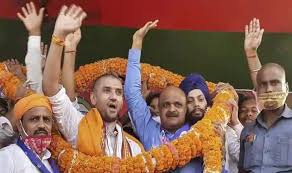 LJP president Chirag Paswan, who split away from the NDA in Bihar and has persistently assaulted JD(U) boss Nitish Kumar, has come in for acclaim from BJP Yuva Morcha boss Tejasvi Surya.

Paswan caused a ripple after he left the partnership in Bihar, yet has been predictable in his acclaim for Prime Minister Narendra Modi, and in the Bihar surveys, is making right just against JD(U) up-and-comers.

Lobbying for the BJP in Arrah on Sunday, Surya was gotten some information about Paswan by columnists. “Chirag-ji is a partner in Parliament. He is a vigorous pioneer. Indeed, even in Parliament, he raises issues of Bihar with a ton of devotion and measurements. He has made his stand exceptionally understood,” the BJP pioneer said.

Inquired as to whether that implied Paswan could be essential for an administration with the BJP, Surya said that was a post-survey conversation. “That is an issue for after the decisions. He is a notable chief. He is a youthful pioneer and an extraordinary companion of mine. I wish him the absolute best. Whatever the outcomes, we can talk about after the decisions,” he said.

Surya, notwithstanding, said that the BJP’s plan was clear and the NDA’s boss clerical applicant keeps on being Nitish Kumar.

Reacting to the RJD’s political decision declaration promising 10 lakh occupations, Surya stated, “He (RJD pioneer Tejashwi Yadav) is just spreading misrepresentation and bogus expectation. Whenever they got the opportunity to be in government, for what reason did they not consider 10 lakh occupations… Now they are spreading lies by this 10 lakh lie. ‘Rulers’ who have gotten politically jobless after the happening to Narendra Modi are presently spreading these untruths.”